You are here: Home / Entertainment / Get Ready for Deception on ABC #ABCTVEvent #Deception #WrinkleInTimeEvent

Oh friends! We are in for a treat starting tonight! Let’s get ready for Deception on ABC! I LOVE a good drama and the folks at ABC have added a pretty good twist to the plot- Magic! Yes, as the ad below says, “The FBI has a new trick up its sleeve” and boy is it a good one! Thanks to Disney for inviting me for the #WrinkleInTimeEvent that included some amazing new shows #ABCTVEvent including this gem that I’ll be watching every Sunday! As a matter of fact, meet you on Twitter for some #ABCTVEvent #Deception tweeting fun tonight!

We had the opportunity to chat with Creator and Executive Producer Chris Fedak & Co-Producer David Kwong. Fedak produced “Forever” and DC’s “Legends of Tomorrow.” Fedak began his career in television as co-creator of the TV show “Chuck” with Josh Schwartz. And interesting enough, Co-Producer David Kwong is also a magician with a pretty cool resume that includes, the puzzle and secret code consultant for NBC’s “Blindspot,” and the head magic consultant on the 2013 worldwide hit film “Now You See Me.” Other films Kwong and his Misdirectors Guild have worked on include “The Imitation Game,” “Ant-Man,” “Mission Impossible: Rogue Nagtion” and “The Magnificent 7.”  Not to mention he’s a Harvard graduate that studied the history of magic. What?! 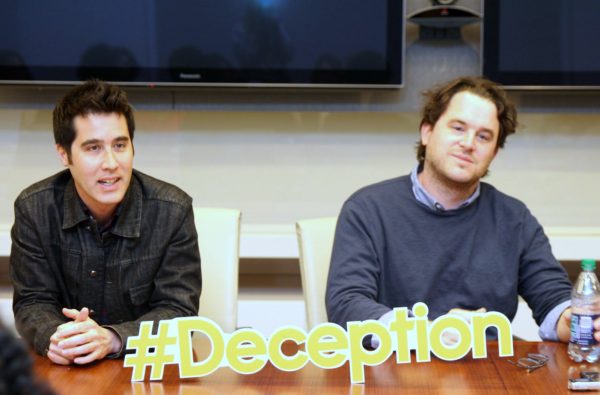 After viewing the episode which I’ll share about more down below- we had the opportunity to have a very special magic show of our very own! Here’s a pic of my friend Amy from AsTheBunnyHops choosing a card during his awesome magic set. 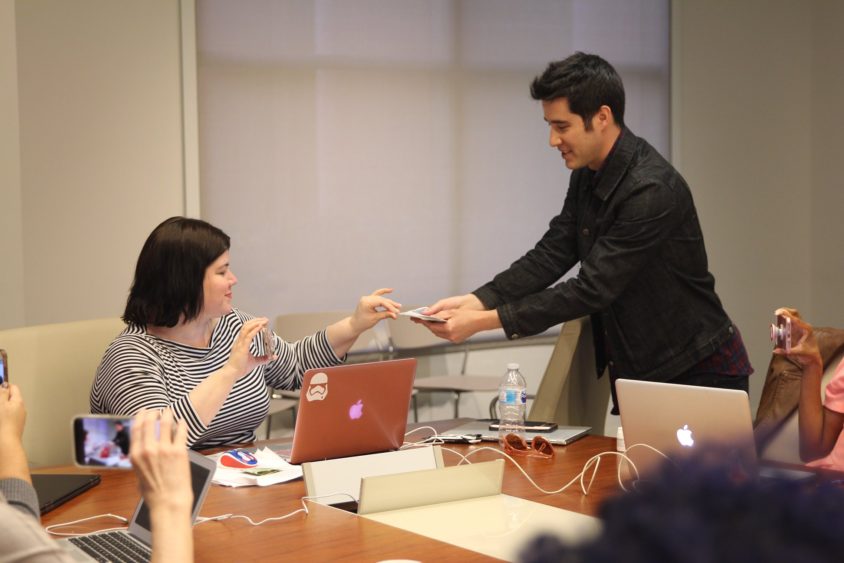 Huge thanks to the fabulous Vera Sweeny of LadyandaBlog for sharing her video of the awesome magic we experienced during our interview. Make sure to check out her site, she’s an amazing woman and entreprenuer. David Kwong is the real deal my friends! Wow!

Now for the show! But first, watch the sneak peak and official trailer!

The pilot episode will blow your mind and will leave you excited for the rest of the season. We had the opportunity to ask the producers questions and here are a few that I really enjoyed how they answered.

I love shows where a team works together to solve a crime or make things happen. It’s real life right? #TeamworksMakesTheDreamWork baby!

Fedak shared with us, “I really wanted to make a fun network show, I wanted to make a show that was like you’re going to sit down, and I’m going to entertain you, and this is going to be the most fun you could possibly have.  And that’s where this show comes from, it was designed to be a network TV show and that’s why ABC was the perfect home for it.  But to your- too what you’re saying, it’s like for me, I love when shows take other shows and- you sort of mush them together and you get something special out of that, so there’s definitely elements of this show that have a bit of- like Castle elements or Sherlock.

I’d love for those comparisons and essentially that’s a big part of Deception because that’s what I watch.  But the other thing too is I also like romance and I like comedy.  And since this is ABC, it’s like I want those elements to be a part of the show too. My cast is wonderful.  And so we want to have- this will be a much more emotional cop show with bad guys than you could- than even I knew I was going to have.” 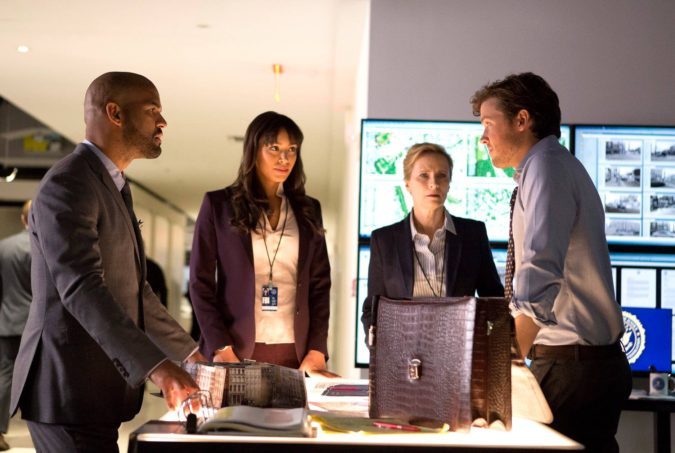 Fedak shared much to his surprise and excitement about Cutmore-Scott’s skills in terms of the deceptions or ” magic tricks.” I have to add that the first one is going to blow your mind!!

“We try to do it as real as possible. When you’re making a show, you’re always up against time constraints, so occasionally we have to juje something. But it was important for all of us to make it- to make them all tricks that could be possible, that I could actually do. So it’s all real sleight of hand. Jack’s doing almost all of it himself. That opening, that opening trick, that’s a one-take of him shooting cards and catching them, he’s really doing that whole thing.”

You will agree that the casting is spot on when you watch the show. One of the break outs for me was Jack Cutmore-Scott. Not only is he easy on the eyes, turns out he’s got skills too! 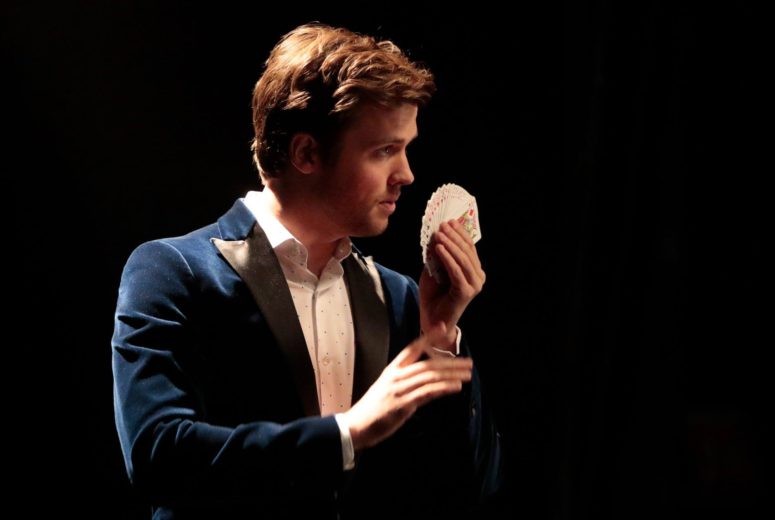 Kwong shared, “Well we got very lucky that Jack Cutmore-Scott is very dexterous and loves magic. And he didn’t have the skills already but he worked very, very hard and continues to work with me and our New York magician Francis Menotti, and he’s always got a deck of cards on him [and] a pocketful of coins.”

Fedak added, “It was crazy. When we cast the show, we always assumed, it would be, oh we’ll hire [someone and] we’ll have David’s hands doing all the magic. But then as we got closer and we cast Jack.  We were lucky to get him, it’s like we had charming we had handsome. And the thing is is that he’s also an obsessive. So as we were walking around the production offices in New York getting ready for the shoot, I’d see Jack working on a trick, and I just thought, I’ll just tell him we’ll just do the visual effects. And that’s not okay for him, he is a perfectionist.”

The entire cast works fantastically together and you’ll agree that they will leave you wanting more and excited to see each week’s deceptions!

I had the opportunity to ask about the magician community. You know there is a community for magicians too! I wondered how their community was looking or speculating about the show, here’s what David shared.

“We we don’t know at large, but we were very careful and my partner in crime and I, we would show our friends and call people up and run things by them. And it’s these are people build their careers on these trade secrets, so we had to be very-very careful to stay away from anything that would ruin anyone’s magic show. So there’s a couple of rules. If something is a hundred years old, and no one is doing that anymore, you can usually put that on screen.

That’s an important caveat. If someone has resurrected something from a hundred years ago and they’re now doing it and they’re making a career out of it, like leave it alone. The other fun thing is if we just come up with it on the spot and we invent our own new method, new trick, we can put that on screen, because it’s our own thing. As Chris said, it’s all about engineering.

We we don’t know at large, but we were very careful and my partner in crime and I, very-very careful to stay away from anything that would ruin anyone’s magic show. So there’s a couple of rules. If something is a hundred years old, and no one is doing that anymore, you can usually put that on screen.

I personally think that a little peek behind the curtain is good, I think it helps people like magic a little more, it intrigues you.”

When his career is ruined by scandal, superstar magician Cameron Black has only one place to turn to practice his art of deception, influence and illusion – the FBI. Using every trick in the book and inventing new ones, he will help the government catch the world’s most elusive criminals while staging the biggest illusions of his career. “Deception” stars Jack Cutmore-Scott as Cameron Black, Ilfenesh Hadera as Kay Daniels, Lenora Crichlow as Dina Clark, Amaury Nolasco as Mike Alvarez, Justin Chon as Jordan Kwon, Laila Robins as FBI Agent Deakins and Vinnie Jones as Gunter Gustafsen. Deception premieres TONIGHT Sunday, March 11 after the premiere of American Idol.