You are here: Home / Giveaways / Win It Wednesday

Time for another Win It Wednesday edition! As Spring rolls in for many of us I find myself daydreaming of a dream trip to an island or somewhere tropic! With all of these new sweeps popping up daily I am crossing my fingers & toes that I’m lucky enough to win one, but if not I hope you do! Here’s hoping that one of you win a fabulous trip or something you’ve been wanting for a long time! Sending you lots of good luck wishes! Win big, y’all! ~Shari 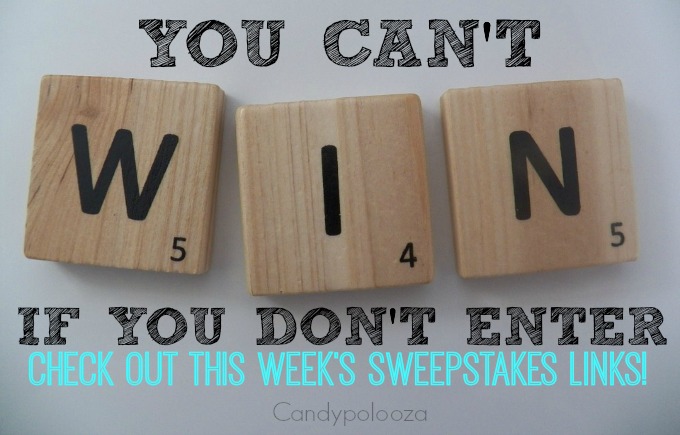 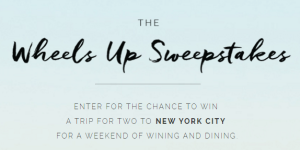 Win:  One (1) Grand Prize Winner will receive: (i) A trip for two (2) to New York City, including a 4-night stay at the Sheraton NY Times Square (ARV: $2,400.00) and up to $1,500.00 provided by Distiller for economy class round-trip airfare (or ground travel) to New York City; (ii) a two-year subscription to Lucky Peach magazine and a copy of their book, 101 Easy Asian Recipes (ARV: $73.00); (iii) $400.00 in RESERVE app credit for booking restaurant reservations in New York City; (iv) six (6) carry-on cocktail kits from W&P Design (ARV: $144.00); (v) a full Brooklyn and Manhattan drinking itinerary provided by PUNCH and (vi) one (1) copy of each of the following books provided by Sponsor: The Old-Fashioned: The Story of the World’s First Classic Cocktail by Robert Simonson and Daniel Krieger; The Negroni: Drinking to La Dolce Vita by Gary Regan; Bitters: A Spirited History of the Classic Cure-all by Brad Thomas Parsons and Ed Anderson; and Death & Company: Modern Classic Cocktails by David Kaplan and Nick Fauchald (ARV: $103.00). Grand Prize Approximate Retail Value (including airfare): $4,620.00.

Win:  One winner will win the prize they shared in their comment. Products must be available on lenox.com and have a maximum $500 value. One entrant will be chosen at random to receive his or her selected prize. 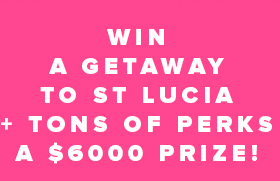 Win:  Prizes: The approximate retail value of all prizes is $6000. The prizes are: 12 month perfume subscription from Scentbird, 4-night stay on the beautiful island of St. Lucia in the Anse Chastanet Resort. The resort is located on 600 lush tropical acres and is surrounded by two beautiful beaches and St. Lucia’s stunning Piton Mountains. Plus more!

Entry: 1X ( All picks will lock at the scheduled tip off time of the Tournament currently scheduled for Thursday, March 17, 2016. ) 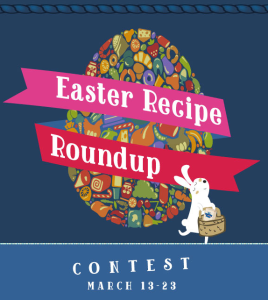 Entry: Daily (You may vote and enter one contest per day – either Imperial’s or Dixie’s, but not both)

Win:  Grand Prize (1): Winner’s choice of a Marriott bed and bedding set or a five (5) consecutive night stay for winner and a guest at any Marriott location.  If the Grand Prize winner is a Marriott Rewards member by April 30, 2016, he/she will receive both prizes. The maximum ARV of the Grand Prize is USD$4,823.

First Prize (1): Winner’s choice of a Marriott bed or a four (4) consecutive night stay for winner and a guest at any Marriott location. If the First Prize winner is a Marriott Rewards member by April 30, 2016, he/she will receive both prizes. The maximum ARV of the First Prize is USD$3,325. 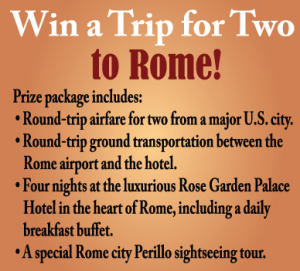 Win:  There will be one (1) winner who will receive a flight voucher for round-trip airfare for two to Rome departing from a U.S. gateway departure city, round-trip ground transportation from Leonardo da Vinci International Airport in Rome and a four-night stay, double occupancy, at the Rose Garden Palace Hotel including a daily breakfast buffet, and a Rome city-sightseeing tour. The total retail value of this prize is $5,000. 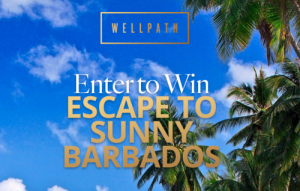 Win: There shall be only one (1) winner of the Promotion, who shall receive the following prizes (the “Prize Package”):

The “Win A Trip to Paradise” Sweepstakes 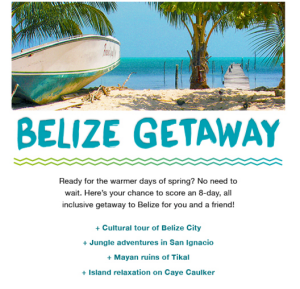 Win:  One [1] potential Grand Prize Winner One [1] $1,500 VISA gift card travel voucher, offered equally by Vulture ($500), Men’s Health ($500), and Casper ($500). This gift card is intended for use of purchasing airfare to and from Belize, daily meals, and any extra curricular activities. Courtesy of Intrepid Travel, the winner will also receive the 8­day “Land of Belize” vacation  Approximate Retail Value of the Grand Prize is $4,000.