You are here: Home / Mommyhood / Just Me / Black Friday Recap

Here’s my night of adventures with my mom. Walmart was our first stop! Totally flaked on the pictures 🙁

We had an idea of what we wanted. The Compaq laptop at Walmart and a 24″ tv there as well. It seems Walmart is trying to find the best way to prevent utter chaos on Black Friday. I totally applaud them on their efforts this year. For big ticket items such as the laptop and tv we were after they formed lines in certain aisles. My mom stayed in the cake aisle for the tv and I ended up in luggage waiting for the laptop. They only had 79 laptops to sell (I kept saying giveaway, knowing full well it would get paid for) as you can see I was lucky number 33. 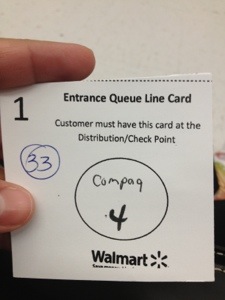 We waited for 3 hours. And might I add I was totally unprepared. In the past you have been able to walk around Walmart while u waited for the item to get released. This year- you had to stay in line. My phone was at 24%(yeah guys charge your phones before going out) but in some way I think it was totally meant to happen this way. (Yes I’m totally one of those persons that believes in cosmic reasoning).

God wanted me to pay attention to the lively train wreck around me. I was surrounded by Black Friday newbies. In three hours you can get to know a lot about people. What they do, what they don’t do, what they like oh the list goes on.
I had the pleasure of sitting with a very nice Vietnamese gentleman that called his wife after the 8pm sale erupted; got a LalaLoopsy set up for his 2 month old daughter. Yeah first time dad- we tried talking him out of it, but he said she could play with it when she got older. The toy was probably ages 5+..

A young man that was waiting for the laptop because he was being lid to wait. $25 a hour. Why didn’t I think of that before? He made an easy $75!

Another young man that asked bother woman sitting with us for her bottle so he could spit in it.. He’s not concerned with germs?? And he also gave me a fist bump when I told him I was a stay at home mom. And a, “That’s what’s up comment,” in approval. It totally is what’s up- I guess.

A woman that claimed to know everyone in the store. She made the evening more interesting after the sale began because she kept leaving the line to pick out more items. (I‘m such. Rule follower that I was honestly afraid to leave the line. I did leave for a potty break once without telling anyone. I was so afraid that they’d take my ticket away. My mom would have been so upset with me.) Anyhoo she was a riot.

I wish I could have taped it all. It was like a bad episode of a reality tv show with 6 strangers waiting for a laptop.. Lol

After our adventure at Walmart we headed to check things out at Kmart. Got some gifts for nieces and nephews on sale! I don’t mind shopping the sale rack for myself so ill also shop sales for you! Lol

From Kmart we hopped across the street to Sears. Actually felt like a thief there because I got such great deals! Totally rocked! Got some E.L.F. Make-up for 50% off! You know it’s already priced to sale- this was even sweeter! Now considering I have about 100 dif colors of eye shadow I may do “A Day a Color” in the coming year! Won’t that be fun! I don’t wear a lot of eyeshadow but I will from now on!

After Sears we headed to Old Navy or “the land of Fleece,” as I like to call it. Aramis requested some fleece pants so that’s what we got along with a couple other gifts and some stuff for me.. Well I didn’t plan on just shopping for everyone else! Hahaha

We () were running out of steam by this time but we managed to hit one more store. Belk! Too bad we weren’t there during the mad rush for $19.99 boots at midnight. Yeah, actually I’m glad we missed that! Mom still managed to get a pair in her size- I was not so lucky 🙁 maybe next year. But I totally made up for it on clothing! Mama got some new clothes! Score!

At exactly 3:56am we decided to head home. I wanted to drop mom off and head back to Academy, a sporting goods store and sit until 5am for a gift card, but I fell asleep. Oh well.

Black Friday 2012 goes down in the books as a successful one for me!

Question:
How’d you do? Did u go out and shop any?

Holidays are officially upon us!

Looks what I made!! I ordered a #pompom maker and