You are here: Home / Family / Learning the #ABCsofRSV to Keep Our Kids Healthy #ad

Disclosure: This is a compensated campaign in collaboration with MedImmune and Latina Bloggers Connect, however all opinions are my own.

Learning the #ABCsofRSV to Keep Our Kids Healthy

“Two-thirds of Hispanic mothers have never heard of RSV, and one in five Hispanic moms only becomes aware of RSV once their child has contracted the virus.” I was one of those five mothers. I’m here to share with you so you won’t be and you can spread the knowledge about learning about RSV with the #ABCsofRSV to keep our kids healthy. I mean look at these boys. My heart breaks every time they become ill. 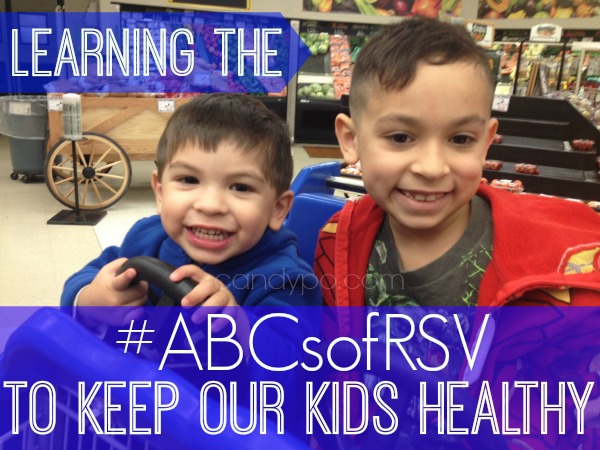 In 2006 our journey with the Army began as a newly formed family of three. Aramis our first child was only two months in November of that year, when we moved to Fort Bragg, North Carolina.  As a first time mom I made sure to always bundle him up and keep him warm when we would take him out in the cold. The following month of December he began being fussy and having coughing fits. I took him into the post clinic and they diagnosed him with an ear ache. The symptoms only got worst and I remember calling my husband in tears, “The baby isn’t getting better, he’s getting worse. What should I do?” We decided to take him into the pediatric emergency in town, at the local hospital. After a few tests the doctor came in to tell us he had RSV. As new parents we had no idea what RSV was, why or anything about it. Luckily our son’s condition wasn’t too critical;  the doctor informed us had we waited to bring him in he would have required hospitalization. Can you imagine the rush of emotions I felt? I felt like it was my fault and I could have prevented it and then of course I thought “Ay Dios que va decir mi mama?!” (Oh Lord what is my mother going to say?!) Last thing you want is your mom getting on to you.. All that mattered was Aramis had been given meds and he was already showing signs of his symptoms improving.

As a new parent I felt guilty that I didn’t know what RSV was. In this post I hope to teach you the ABC’s of RSV and how if you didn’t know about it before, you’ll leave more knowledgeable about Respiratory Syncital Virus.

How can you prevent RSV? Read the following information and keep in mind the ABC’s of RSV.

A is for Awareness:

RSV is a common seasonal virus, contracted by nearly all children by the age of two, and typically causes mild to moderate cold-like symptoms in healthy, full-term babies. Preterm infants, however, are born with undeveloped lungs and immature immune systems that put them at heightened risk for developing severe RSV disease, often requiring hospitalization.

• RSV occurs in epidemics each year, typically from November through March, though it can vary by geography and year-to-year

• RSV disease is the leading cause of hospitalization for babies during their first year of life in the United States, with approximately 125,000 hospitalizations and up to 400 infant deaths each year. *How lucky were we? We were almost a part of this statistic.

• RSV disease is responsible for one of every 13 pediatrician visits and one of every 38 trips to the ER in children under the age of five.

B is for Babies:

• Premature babies—defined as those born before 37 weeks gestation—are most at risk for developing severe RSV disease because they have underdeveloped lungs and fewer antibodies to fight the virus than babies born full term.

• Amongst Hispanics, the preterm birth rate has grown six percent over the last decade. Currently one in eight Hispanic babies is born premature and it is likely that high prematurity rates are a reason for increased risk of RSV within Hispanic communities.

C is for Contagious:

This is definitely one of the things that scares me about RSV. How easily another child can “catch” it. I believe I heard of RSV more this year, than I have in the past. Very scary!

RSV is very contagious and can be spread easily through touching, sneezing and coughing. Additionally, the virus can live on the skin and surfaces for hours. Learn the symptoms of severe RSV disease and contact your child’s pediatrician immediately if your child exhibits one or more of the following:

• Bluish color around the mouth or fingernails.

• Rapid, difficult, or gasping breaths –This had to have been the scariest moments for myself as a new mom to see my infant of a couple months battling for a breath.

I am so proud to be a part of this campaign and to share this information. It’s so important that you aren’t in the same shoes I was in less than 7 years ago. I have to tell you that last month Ezra was actually diagnosed with RSV. Thank God, since Aramis’ diagnosis I have made sure to watch their symptoms anytime they become ill and it was caught very early. His bout with RSV was easier than Aramis’.

Check out this awesome infographic:

For more information about RSV and prevention, visit www.RSVprotection.com. Please also use the hash tag#ABCsofRSV when tweeting.

Did you know about RSV prior to reading this post?

Previous Post: « Party of Four for #BestLobsterFest at Red Lobster #ad
Next Post: Making a Splash at Schlitterbahn for Spring Break #BahnLove #ad »