You are here: Home / Television / My Thoughts on the 73rd Annual Golden Globes Television Nominees

So you know my movie thoughts, it’s time for my thoughts on the 73rd Annual Golden Globes Television nominees. I probably watch way too much television than the average person but what’s a girl to do right? I love me some tv! I love that the Golden Globes also present to my friends on television because have you noticed how many movie actors are coming into television shows now? I absolutely love it!! Let’s get down to the nitty gritty shall well?! 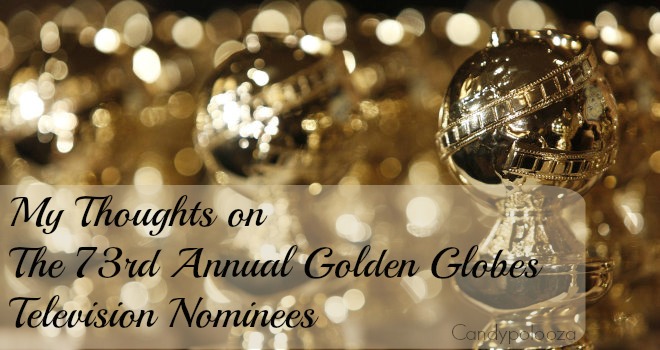 Whoa buddy!! I have seen three of the five nominees. All of the Dramas listed have gotten amazing acclaim and I’m honestly going to be biting my nails!! Who do I want to win? Gosh.. I can’t even begin to guess.. Maybe Narcos? Maybe Empire.. Mr. Robot.. I love them all!!

Mozart In the Jungle

Orange Is the New Black

I’m down for OITNB personally. I wasn’t too happy with how the last season ended but we shall see. I’ve been wanting to see Transparent for some time now and haven’t added it to the list. I’m going to have to check out all of these series.

Oh Jon Hamm, will you take this last one for the road? I think it’s be incredible for Bob Odenkirk to take it for the spin off series Better Call Saul but Rami Malek and Wagner Moura are close on the heels. And Liev Schreiber is amazing in Ray Donovan. This is going to be too close to call too.

Viola Davis, How to Get Away With Murder

I love love love Robin Wright in House of Cards as well as Viola Davis and Tarji P. Henson.. another too close for me to call.

Aziz Ansari, Master of None

I’ve seen none of these series so I can’t really say.. I need to get my television game on point don’t I? It’s all about balance guys. I’m trying. But trust me I’ll be binge watching a lot of these shows now.

I’d love to Gina Rodriguez to take this category but I also loved Lily Tomlin in Grace and Frankie and Jaime Lee Curtis in Scream Queens. But Julia Louis-Dreyfus is a force when it comes to awards!! She’s amazing! Exciting!

I absolutely loved American Crime. Keeping my fingers crossed for this one!

Oscar Isaac, Show Me A Hero

I was too scared to keep watching American Horror Story so I can imagine how amazing Lady Gaga had to have been. This would be an amazing win for her. But the angst, fear and commitment Felicity Huffman showed in her character of last season’s American Crime was amazing. Hoping for a win for Felicity.

I loved Regina King in American Crime! Uzo Aduba is also amazing in OITNB. Downton Abbey has a great track record for wins. This is one to watch.

This is a great list of amazing shows and actors. I’ll definitely have to keep an eye out for the Prime Time Emmy’s this year because a lot of my tv watching includes prime time television. But like I mentioned above I love the the Globes includes our friends on tv and not just movies. Will you be watching tonight?

Let’s see how many of my hopefuls actually win tonight!

Previous Post: « Amazing Disney Films To Watch in 2016!
Next Post: Get Excited With Us! Sesame Street is coming to HBO! #SesameStreetonHBO #HBOLatino #ad »