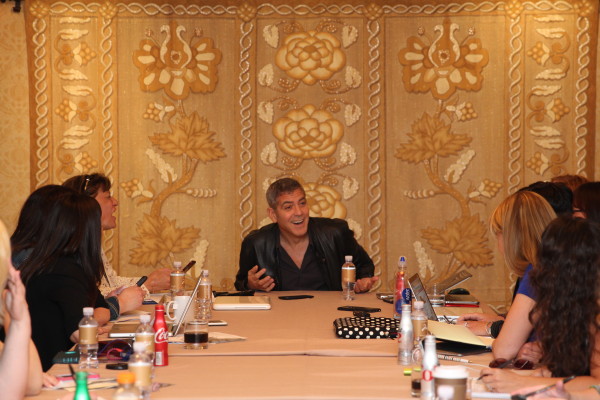 The George Clooney you see on the talk shows is the same George Clooney we met that Friday morning in Beverly Hills. Very easy going and super down to earth. You’ll be able to tell the playfulness in his words with us. He had great answers and gave awesome insight on his character, his co-stars and Tomorrowland the film.

Working With the Young Cast 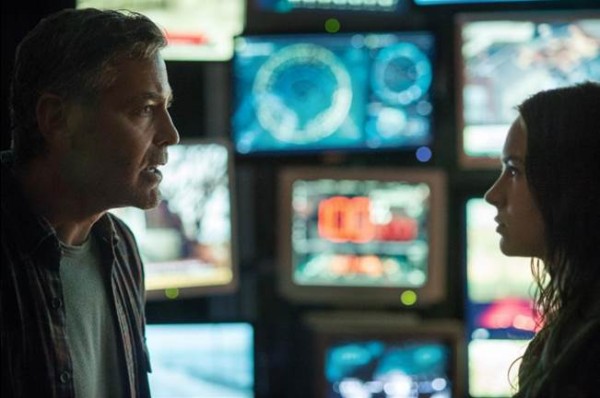 Question: I loved how your character interacted with, Raffey Cassidy and Britt Robertson.  I just thought it was, like everything was so sweet between all three of you.  What was it like working with such young and talented actors?

George: “I didn’t like them.  I’ll say that… [LAUGHING.]  Now, we can say nice things now, but the truth is I don’t care for them.  [LAUGHING.]  Well, first of all, Britt is fantastic and her career is just at the very beginning and is going to be really fun.  Raffey is spectacular and she was just 12 at the time, I think, and way too talented, for her age, sweet and funny.  Ah, it is also a fun part for me because, as you well know, if you’d seen me speaking to a 12 year old that way to her at the grocery store, you’d call child services. [LAUGHING.] I’m like who gets to yell at a 12 year old? I mean yeah, teachers do. But in the movies it’s so much fun because, you know, she’s not really a 12 year old and it’s really fun to be able to. They sort of set up a way where, we’re a little family of three, but she’s the adult, driving the car and Britt and I are the two kids, arguing and bickering all the time.”

George shared his wisdom on acting with the young actors..

“They were fantastic, they were really sweet and I think they’re having a really fun time with this, which is, you know, that’s how it’s supposed to be. When I work with younger actors, I always have to try to remind them that, you know, this is, this is the fun kind of job that most people don’t get to do.   And if you get to be an actor and work, and somebody pays you for it, you’ve caught the brass ring and it’s just fun.  So, that’s part of, the thing is, they really do dig it and they’re having fun, which is really a good time.“ 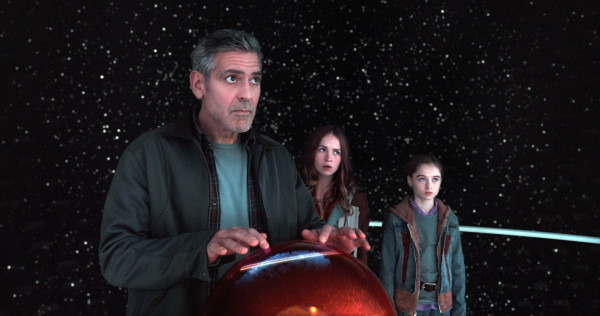 This photo released by Disney shows, from left, George Clooney, as Frank Walker, Britt Robertson as Casey, and Raffey Cassidy as Athena, in a scene from Disney’s “Tomorrowland.” The movie releases in U.S. theaters on May 22, 2015. (Film Frame/Disney via AP)

Question: What was your favorite scene or favorite fun memory while filming Tomorrowland?

George: “I don’t remember much of it.  I was drunk most of the time.  [LAUGHING.]  I will tell you, there was a lot of moments, because it wasn’t all done to green screen. They were nice enough to build a lot of these sets where you actually got to play in them. The most fun we had was the driving sequences, believe it or not, because we’re being towed but Raffey is driving and I kept having to teach her  you’ve got to keep looking at the road, I mean. And she’d be like,  [IN VOICE] what is the deal?  Like my mother actually drives, which is true, it was fun because there was no technology.  There was nothing.  It was just old fashioned, three people sitting in a truck for five days, arguing and doing fun stuff.  And that’s really fun for actors, because you don’t have to do any make believe.  It’s all just right there. I really enjoyed that. It was fun doing the stuff, like shoving all the packs of powder down their, throat because we must have done, I don’t know, 30 takes, and every time I go, here you go.  [LAUGHING.]  And Britt would be like not the whole pack. And I was like yeah, so much sugar on it.”

That led us into our next question. If you have seen the film keep reading, if you haven’t.. skip to the end of this post..

Question: Did Britt really drink all those bottles of Coke?

George: “Yeah, now in fairness, Brad was kind enough to only do it, I think, three times.  But she does down two cokes in the take.  I think it’s two cokes in the take. And, and I was like, I just sit there going, you know, she’s gonna explode, but she did it.  Because you learn, like young actors, I remember when I was doing Descendants and we had this little girl, she played my youngest daughter in the film, and we did a scene where she gets to eat ice cream, and she never acted in a movie before and she just starts pounding the table. And they’re just sitting there watching her going, you can see her, take 9 [LAUGHING] and she literally was like uuugh.” 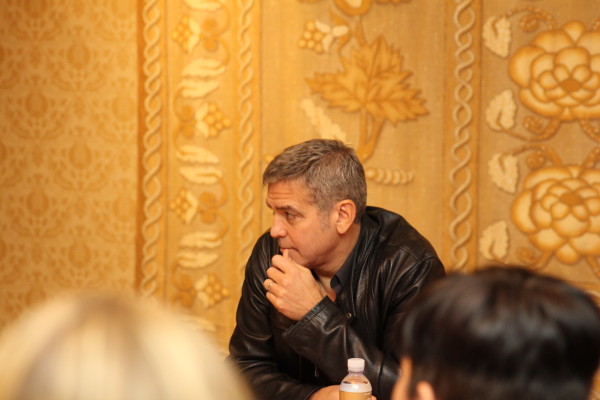 Question: Where ther any scenes that were emotionally hard for you to film?

George: “Emotionally hard, no. Because I find, movies in general aren’t emotionally, I mean, you’re involved in them but, it’s not really something honestly terrible has happened. It is still make believe but I did find that, it was a tricky scene. There’s a moment where I have to let, Raffey’s character go, the robot go, and there was a really weird, we’d shot it once and she kind of clicks out, but her eyes are open still and we drop her out, and it literally feels like I’m murdering her. It really does.  It was odd.  And you’re watching it, it’s so disturbing and it was really awful, so we went back and re-did it where she sort of completely goes out, because otherwise it really felt horrible.  You know, there’s all kinds of weird balances in this film, you know.  My relationship with her is very, we’re walking a very thin line there like I don’t know, this is kind of weird, you know. And it’s a constant thing like oh, oh boy. Let’s walk very carefully through these things. And thankfully, Brad is Brad and is really good at what he does, you know.  He makes it, made it much simpler.”

The final scene with Athena will definitely get you.

Seriously, what an amazing man that George Clooney is. I’m not saying that because he’s been named The Sexiest Man of Year twice, I’m saying that after sitting in a room with him and briefly interacting with him during our interview. I have to share with you, when a question was asked he looked directly at the person asking the question and answered them. It was awesome. Yes, I did ask a question and had his attention for just a second. LOL It was an amazing time during the press junket.

And one more time if you missed it the first time. 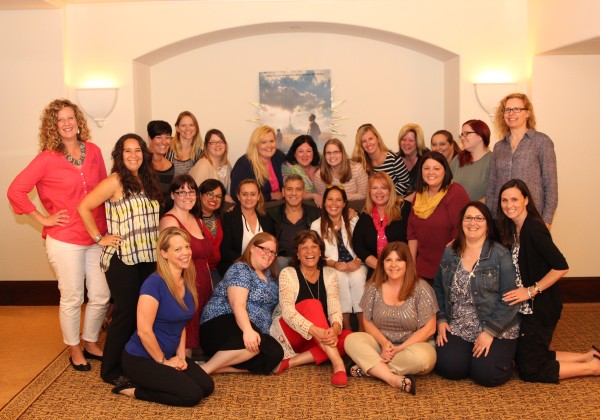 If you didn’t see Tomorrowland this weekend you must see it soon! 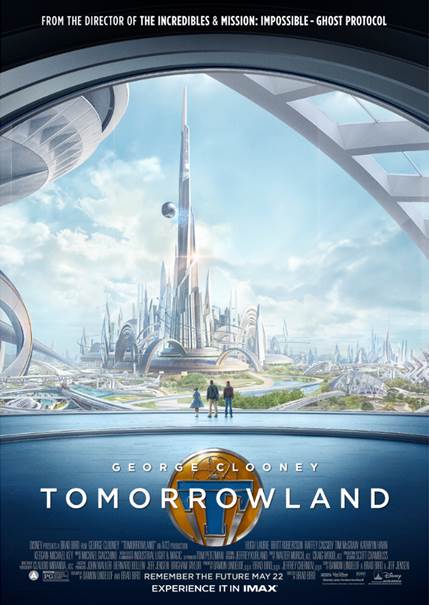 I hope you come back and let me know what you thought of the film!