The day is here! Walt Disney Animation Studios Raya and the Last Dragon is now available on Blu-Ray and 4K Ultra HD. If you do not have Disney+ and have not seen this film, this one is one you’ll want to see many times over. Check out my review here. I’m super excited to have a giveaway available for two digital codes, thanks to our friends at Walt Disney Animation Studios, make sure to go all the way down to enter. Raya and The Last Dragon is superb in the storytelling and animation. 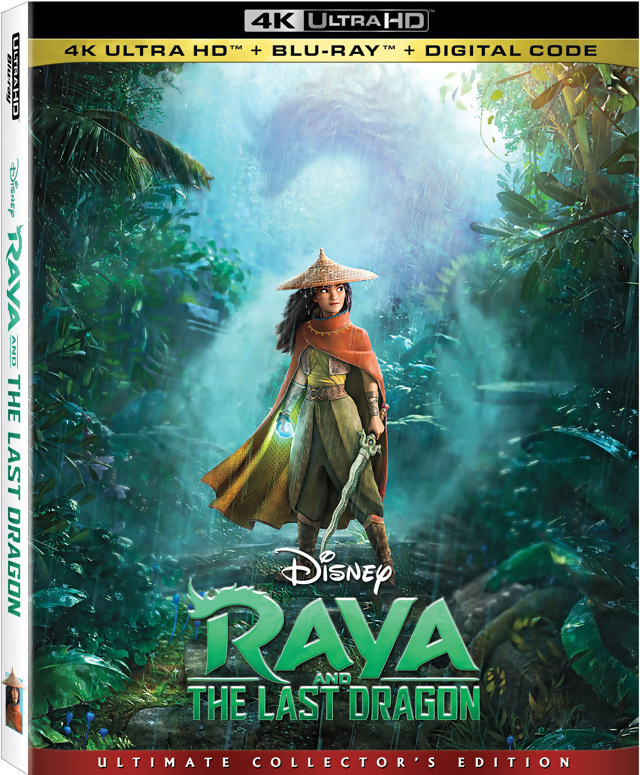 Long ago, in the fantasy world of Kumandra, humans and dragons lived together in harmony. But when sinister monsters known as the Druun threatened the land, the dragons sacrificed themselves to save humanity. Now, 500 years later, those same monsters have returned and it’s up to a lone warrior, Raya, to track down the last dragon in order to finally stop the Druun for good. However, along her journey, she’ll learn that it’ll take more than dragon magic to save the world—it’s going to take trust as well. From directors Don Hall and Carlos López Estrada, co-directors Paul Briggs and John Ripa, producers Osnat Shurer and Peter Del Vecho, and featuring the voices of Kelly Marie Tran as Raya and Awkwafina as Sisu.

RAYA AND THE LAST DRAGON – As an evil force threatens the kingdom of Kumandra, it is up to warrior Raya, and her trusty steed Tuk Tuk, to leave their Heart Lands home and track down the last dragon to help stop the villainous Druun. © 2020 Disney. All Rights Reserved.

This 4K Ultra HD + Blu-Ray set is fantastic with all of the added bonus features.

The voice of Kelly Marie Tran (Star Wars Episode V111) is the amazing and strong lead character of Raya. Tran did such an amazing job of bringing Raya to life. You will truly fall in love with the newest Disney Princess, but you’ll see her for the heroine that she truly is. Check out the rest of the fantastic actors that lent their voices to this phenomenal film.

Kelly Marie Tran as the voice of Raya

Awkwafina as the voice of Sisu

Izaac Wang as the voice of Boun

Gemma Chan as the voice of Namaari

Daniel Dae Kim as the voice of Benja

Benedict Wong as the voice of Tong

Jona Xiao as the voice of Young Namaari

Sandra Oh as the voice of Virana

Thalia Tran as the voice of Little Noi

Lucille Soong as the voice of Dang Hu

Alan Tudyk as the voice of Tuk Tuk

Now for the Giveaway!

Good luck everyone! Please make sure to share with your friends!

Previous Post: « Tips On Creating A Healthier Home Office
Next Post: Round Table Interview with Writers and Director of Raya and the Last Dragon #DisneyRaya »