You are here: Home / Education / 15 Facts About DACA

If you follow me on Facebook, you knew this post was coming. This is not meant to be a political post by any means, it’s more to  inform. When I started this blog, I wanted it to be place anyone could come and learn about fun and positive things. I won’t be going completely political on you from now on, this post is more to share about DACA. I am not a Dreamer, but DACA intrigues me and I wanted to learn more about it. I learned a lot from these 15 facts about DACA shared below and if you had any questions, I hope this clears up some for you. As always feel free to leave a comment or send me an email if you have any other questions. This is interesting information. 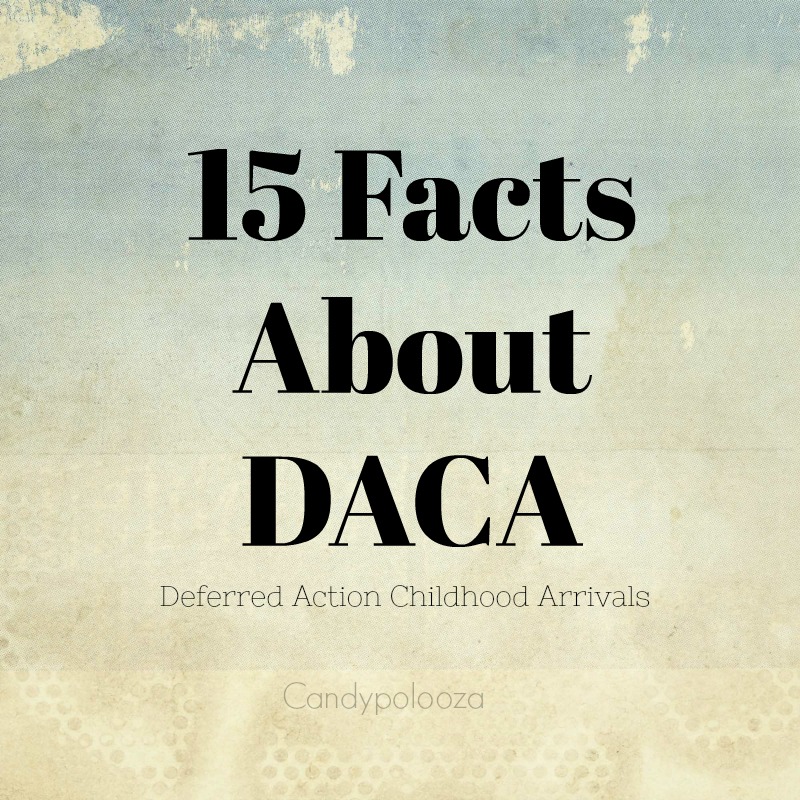 1. DACA recipients are not eligible to vote (and they never will be). DACA is not a path to citizenship or amnesty. It simply shields them temporarily from being deported because as children, they were brought to the US illegally by their parents by no fault of their own. It is not a liberal conspiracy for capturing future Democratic votes. They will never be citizens.

2. DACA recipients do not receive free healthcare, welfare, or food stamps. They are not even eligible for Obamacare or Medicaid.

3. DACA recipients are required to pay income taxes. It’s estimated that ending DACA would decrease state and local revenue by $800 million a year.

4. DACA recipients are not just “too lazy” or “too busy” to take the proper steps to legal citizenship. Once they are approved for the DACA program, they will never be eligible for any other legal status in the US other then “DACA,” even if they are married to US citizens. As the law stands now, the option to become a US citizen will simply never be made available to them. The program is only meant to be temporary protection from the deportation and a chance to live, work and obtain a driver’s license legally in the US. Nothing more. It’s not just a matter of walking up to a desk somewhere at City Hall, filling out an application and reciting the Pledge of Allegiance.

5. The United States is the only home they have ever known. If they were to be deported, they will be sent to a country they have never seen. Most often, their parents fled a country suffering from severe poverty, war, and oppression. Bringing their children to the US, even with the serious risks of doing it illegally, may have been their parent’s only hope. Everyone wants the best for their children.

6. DACA recipients speak English and are very often bilingual. For the most part, they are completely assimilated in American culture. Some don’t even realize that they are not in the country legally until they are old enough to need a driver’s license and a job. It is often devastating and embarrassing for them to suddenly find out they are “illegal.”

7. DACA Recipients cannot have a criminal record and will be deported if they don’t adhere to some very strict rules. Saying they are “mostly violent criminals and gang members” is unequivocally false. If they screw up, they have to leave the country.

8. To be granted DACA status, they must pass a background check, have a clean criminal record and a high school diploma or GED. They lose their eligibility if they commit a felony or a significant misdemeanor. Even a regular misdemeanor, juvenile adjudication, or expunged conviction can put them at severe risk for eligibility. (And for the record, the incarceration rate of native born American citizens is 14% higher than DACA recipients as a whole.)

10. The DACA program has been overwhelmingly successful for the US economy. It is estimated that the US would lose $460 billion dollars in GDP over the next 10 years without DACA. The majority of recipients buy cars, houses, and other large purchases that contribute to strong economic growth. We need them.

11. DACA recipients live in fear and uncertainty. They must reapply for DACA status every 2 years for the rest of their lives. It costs at least $500 every time they apply. It’s a stressful, uncertain life considering they are penalized for something they had no control over.

12. Over 72% either have advanced degrees or are enrolled in higher education. Contrary to popular belief, they are not instantly rewarded a free college tuition. It is true that many opportunities are made available to them, such as scholarships, in-state tuition, and in some cases financial aid, to encourage them to further their education. A better education means they are better contributors to their communities.

13. DACA stands for the “Deferred Action Childhood Arrivals” program. They are also affectionately called “Dreamers” after the “Dream Act” which stands for “Development, Relief and Education for Alien Minors.” Recipients must be under the age of 31 as of June 15, 2012, and must have come to the US before reaching 16.

15. Sadly, DACA has been put on the chopping block by the Trump administration and its future looks bleak. Donald Trump, Attorney General Jeff Sessions, as well as Fox News, Brietbart, and other Right Wing “media” outlets are successfully leading the way on stoking serious fear about DACA to the American public. Not only are they trying to end DACA, they’re trying to end several other LEGAL immigration programs and laws. They want to hand pick what nationalities will be considered for immigration to the US. Call your representatives today and let them know you insist on the DACA program to be continued.

You can find more information HERE on who you can reach out to, to help protect the dreamers. #ProtectDreamers