Oh Zach Braff, you are back and everyone is going to LOVE you! Not just your fans from your Scrubs days or Garden State- new fans. Tweens and teens alike are going to get introduced to Zach Braff, Tiya Sircar and Michael Imperioli and have their minds blown! ABC’s Alex, Inc I predict will be a HIT! Catch the premiere TONIGHT, or DVR it, but don’t miss ABC’s Alex, Inc! Very excited to share a few of the questions and answers from our Q & A time with Tiya Sircar (“Rooni Schuman”), Zach Braff & Matt Tarses with you today!

It’s bittersweet to write this post. My final post from the WrinkleInTimeEvent. Many, many thanks to Disney for whisking me away for such an AMAZING press event, one I won’t forget. As I’ve mentioned before, I LOVE all things entertainment movies and television are my true jam. There are lots of television shows that I love, but I have to say that when you are able to premiere a show on one of these trips and you love it- it’s like magic right before your eyes. And getting to meet the actors and the people that helped bring it to life- UHMAZING!

It was interesting to hear how the show came about and how the team came together. Zach shared that John Davis, the producer of the show approached him and introduced him to the real podcast the show is based on. And he only agreed to do it if a former writer from Scrubs Matt Tares was brought onto the project. How cool is that?! So he did, and the rest is tv history. Here’s a bit a trivia for you the original idea was pitched in 2012. How about that- it takes a while for good ideas to come together and I’m so glad this one did! You will agree with me after tonight’s episode! Here’s more on how it came together:

Matt shares what he thought about the project, “Well, and I think what applies to this, you know, he — and then he won’t say this, but he’s, you know, not as young as he was when he played J.D. on Scrubs. And I think the idea, that since I have kids. And the idea that this was a story about a guy with a family doing this thing that was sort of hard to do even if he didn’t have a family, it’s that much harder with a family plus that much — you have that much support on the other side of it. It was something that appealed to him. I think being a dad and he’s a really good — he’s really good with children. It all sort of emerged organically”

When recreating a show from real life, you would think you’d see the same onscreen right? Well not always- but on Alex, Inc. they did a damn good job of mirroring the original story in the family. The real family is a multi-cultural family, they did a perfect job in casting this crew. Here’s what Matt Tarses shared about casting.

“Well, you know, the real — again, this is based on this real podcast and the real couple that — it’s about a guy, but his wife is Persian-American. We just wanted to preserve that family dynamic so we looked for all kinds of actresses. In the podcast, there’s not a lot about her. Just a bit about her parents and about her, their difference in the different cultures so, we tried to find the best actor we could find who had this kind of multicultural, multiracial and Tiya Sircar was the best one we found. I feel like we found these two kids who are incredible actors and who look like they could be their kids. That’s almost my favorite part of the show is just that picture of the four of them together.”

One of the things I noticed, while thinking of the Scrubs days, it wasn’t exactly a show I could watch with my kids right? Zach Braff to the rescue! Here’s what he shared about this:

“I’m an uncle and I have a lot of godchildren. And one thing that kept coming up and I know you all can relate -is that even though there’s so much great TV out now, I kept hearing there’s not a ton that we all wanna watch together. Like, we all love these shows that you can’t watch with your kids and your kids all have their shows that they love to watch.

A theme that kept coming up as the producer in me with the little lightbulb went every — a theme was, you know, after dinner, before we put our kids down, there’s not a ton of content that we all wanna watch together. And I actually — I was dating a woman for a bit who had a nine-year-old and I experienced that. I was like he wants to go watch his shows. We don’t wanna watch that. Like, we only watch Shark Tank together because he happened to love Shark Tank. So I kinda — that was another thing in my head was I would like to do something — it feels like to me like that’s an area where there’s more content. Obviously ABC’s great at it with Blackish and Modern Family and stuff like that. So, I felt like a great space to do it.”

This is totally that show you guys! The Scrubs kind of belly laugh- that won’t offend or make you blush in front of your kids. This TV family is so amazing.

I absolutely love learning about new cultures and their traditions. Tiya is of Indian decesant and since her original character was Persian-American, it was pretty amazing that they decided to integrate her origin into the story. During the season, we’ll learn some Bengali customs and in one of the upcoming episodes an actual story from her mother will be used. It’s beautiful and can’t say how much more his made me love the series!

Tiya shares how they brought in her family as sort of consultants for the show as well!

“It was originally written she was Persian-American as the woman who she’s based on is in real life. When I got this job I thought, oh, Hollywood. Like, guys, I can’t play a Persian-American, but these guys were like, well let’s change her and let’s make her you. They had me come in and meet the writers and we had this two hour conversation about my upbringing in Texas and my parents’ upbringing in Calcutta and, when they came over as grad students and their experience as Indian immigrants.

We talked for a long time and then slowly this character evolved from who she was on paper to so closely related to who I am in real life, which I have never gotten to play before.

Another amazing part of this story for me anyway. They wanted to get to know me and they wanted me to get to know the writers. And as we were talking, they were asking a lot of questions about my parents, ’cause, you know, you — the episode you just saw, they knew they were gonna be writing that and wanted to get some more information. And so I was talking about my parents stories that I’ve grown up listening to, and I happened to mention that my parents were coming in town the next day to visit.

These guys were like, “would they maybe wanna like sit down with us?”  And I was like absolutely. Are you kidding? For sure. So, I brought them in. They had a whole sit down, talk. My dad — my parents are professors. There was a dry erase board. My dad gets up and starts like and makes a diagram. There’s a map of India. There’s notes.

These two guys and just specifically were like, look we want this to be as, accurate a portrayal as an Indian-American family or an Indian-American character as possible. So, even if — you said even if it’s down to like the right kind of tea that they’re drinking, and I was like that’s good because we are very particular about tea. So, I really appreciate how much of an effort the producers and writers have made to like make this authentic and not just sort of like an stereotypical idea of what an Indian-American family looks like.”

That was long- but I had to share that part of the interview. I seriously can’t wait to watch the rest of the season! 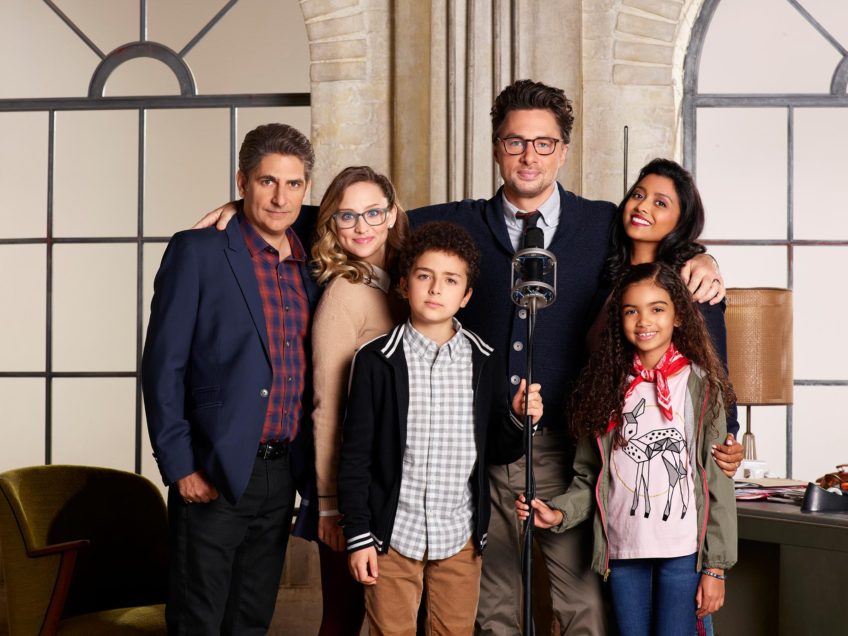 It was an absolute pleasure to chat with Zach, Tiya and Matt. As you can see in the pic below I kinda fangirled with fellow Texan Tiya! LOL Clearly Zach and Matt were like, “hey what’s going on here!?” This might have been before or after our high five. LOL 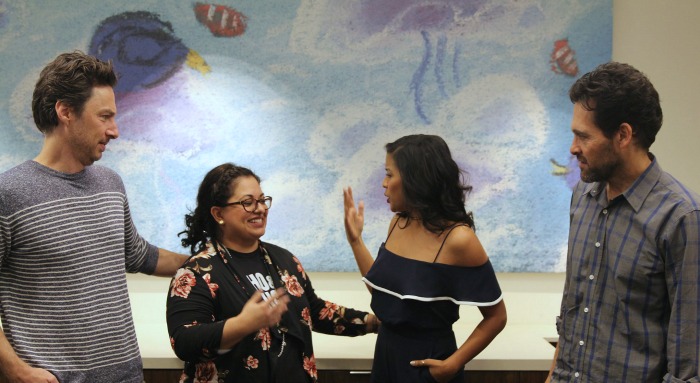 Get social with Alex, Inc.!  FYI Zach will be tweeting tonight!!

More on the show:

Based on the podcast StartUp, Alex Schuman (Zach Braff, “Scrubs”) is a brilliant radio journalist, husband and father of two who is about to do something crazy – quit his job and start his own company. He quickly discovers it’s going to be a lot harder than he thought. Zach Braff stars, directs and is executive producer with Matt Tarses (“Scrubs”) and Davis Entertainment (“Dr. Ken,” “Blacklist”).

« Cast Interviews of ABC’s Splitting Up Together #ABCTVEvent #SplittingUpTogether
The Cathedral of Saint Matthew the Apostle in Washington D.C. #TravelTuesday »