You are here: Home / Entertainment / Talking With The Mrs. of A Wrinkle in Time: Reese Witherspoon, Mindy Kaling and Oprah Winfrey #WrinkleInTimeEvent

A Wrinkle in Time will forever be a book that I share with my children not only for the literary value of the content but for the opportunity that it brought this mama. Thanks so much to Disney for inviting me on this amazing press trip, all opinions in this and all content from the #WrinkleInTimeEvent is my opinion. If you’ve read the book you know of the three Mrs. I’m talking about in the title. Mrs. Whatsit, Mrs. Who and Mrs. Which. Three women that guide Meg Murray thru the “wrinkles.” In life the roles of the Mrs., were cast perfectly if you ask me. During the Wrinkle In Time press junket we were granted to amazing opportunity to interview with Reese Witherspoon, Mrs. Whatsit, Mindy Kaling, Mrs. Who and Oprah Winfrey, Mrs. Which. What I can only describe as magic and so much more happend.

The three celestial beings, Mrs. Whatsit (Reese Witherspoon), Mrs. Who (Mindy Kaling) and Mrs. Which (Oprah Winfrey) in Disney’s A WRINKLE IN TIME, an epic adventure directed by Ava DuVernay and bsed on Madeleine L’Engle’s timeless classic which takes audiences across dimensioins of time and space, examining the nature of darkness versus light and ultimately, the triumph of love.

We screened the film the night before so we were able to get a full grasp of these amazing actors as their characters so our questions were on point. Unfortunately I didn’t get a chance to ask a question- but just being there sitting in the front row I felt like they were talking to me. That probably sounds creepy, but I’ve been a huge fan of all three women for as long as I can remember- Oprah being the longest of course. It was incredible to see the three powerhouses sitting right in front of me! 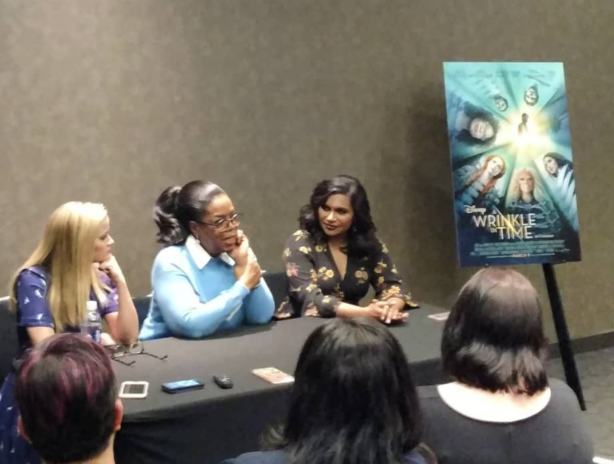 I think to myself that it would be hard to have complete access to Oprah and not talk her ear right? Reese Witherspoon and Mindy Kaling shared those exact thoughts with us. Here’s what they had to say, I have to say it was really funny to see how Oprah obliged and agreed that they were chit-chatters. I would have loved to be in this chit-chat!

Oprah said, “These are the talking-est girls you ever saw. Oh my gosh, they talk about everything.  What was on TV last night, what you didn’t see on TV. They know everybody. They’re in the cultural buzz. I actually called Gayle and I said, “Oh my God…”

Reese added that they would constantly ask, “Are we annoying you?”

Mindy added, “Part of me was like, “I felt so bad for Oprah.” We get there at five thirty, five o’clock in the morning. You just want to get your work done, she has nine different companies.  But Reese is sitting next to me and it’s like, “That’s not going to happen. How many people do you know in this world who live in the United States who were personal friends with the late Nelson Mandela?  So I went and asked her questions. She might want her serenity, but I can’t give it to her.  I’m just going to ask you questions and then we’re going to pull you into our stupid conversations about nail polish. That’s just what’s going to happen.” 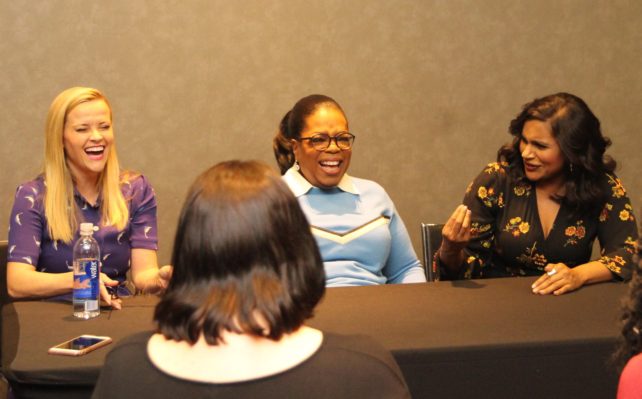 Louise from Momstart.com caught some great candid pictures during this interview. It was such a pleasure you guys!

Each of the ladies share whih scene inspired them.

Reese Witherspoon says, “I know what my favorite was, when Storm looks up and she’s talking to her little brother who’s been possessed sort of by darkness and she says I deserve to be loved. I just lost it, I was like, we all deserve to be loved, and we all deserve to tell our stories and be the center, the lead of our own movie, the captain of our ship. And we do not see that enough, we don’t see ourselves enough and I think a movie like this with a company like Disney getting behind it says so much to to young people.”

Mindy Kaling, said to us, “I think you reminded me there are so many quotations in the movie, but one of them really in a quick part is when I say, Storm has fallen down and she’s she’s feeling hurt, she doesn’t want to stand up.  And I say the wound is where the light enters, which is so profound.”

Oprah shared with us,  “That one resonated so deeply with me because I’ve often said that, the wounds help you create wisdom for yourself.   The wounds is where the light enters, when I heard that it it resonated deeply with me, because I feel that that is really true, that everything that happens to you that wounds you, that is crisis, is the open door for more light to actually come in.  My favorite is a wind aside from wounds where the light enters.”

Future in Entertainment is Female

The ladies had amazing insight on the future of entertainment. I leave you with Oprah’s words: “Oh yes, in the Golden Globes speech I was saying a new day is on the horizon, it’s actually here and we are living it, this is it, we’re experiencing it, you’re seeing it up there on the screen.  It’s happening!” 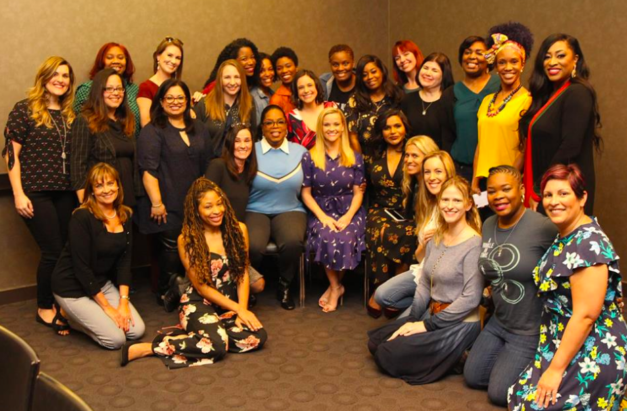 After the group picture some got hugs and hand squeezes, I was happy to stand one person away from the three incredible women. Even though I’m a chatter box I have to say, that I couldn’t come up with something to say other than “thank you.” Which my thanks meant so much more than just “thanks for taking a picture with us”, you know. While we were having lunch, Oprah actually walked back in and looked over my shoulder to see what we were eating, and guess what I said, “Want something to eat?!” I mean really Candy?! But she said no and then I grabbed her hand to shake it and she gave me that Oprah squeeze I wanted to so badly. What a moment. I feel like we all got a little bit of that Oprah magic because we all felt very empowered and fortunate to be there. I mean look at all of those smiles!

Make sure you head to theaters on Friday, March 9th to see A Wrinkle in Time!