You are here: Home / Entertainment / All About the Music of Mary Poppins Returns #MaryPoppinsReturnsEvent

Yes, this post is one of my favorites! It’s all about the music of Mary Poppins Returns. We had the awesome opportunity to sit with Marc Shaiman and Scott Wittman, the two musical minds of behind the music of Mary Poppins Returns and I could not be happier. I’ve mentioned before that I was a band nerd in high school and I absolutely LOVED orchestra season. Thanks to Disney for inviting me on this amazing press junket, all opinions are my own. One of the things that I can’t wait to enjoy during the third, fourth etc times I watch it will be how much I enjoy the music. It truly

A couple weeks ago I realized the Mary Poppins Returns soundtrack was already on Amazon Prime Music. Let’s just say I’ve been listening to it while I write. Oh don’t tell me you haven’t heard it yet?! Go ahead and grab the soundtrack NOW!

Scott: “We went back to the books, and there were so many more adventures in all the stories. Some of them just cried out to be sung.  And then we had Emily and Lin, and we had them right from the beginning, so we got to sculpt all this material on them… The first movie was like our teacher, was our parents… There’s gonna be something about what we wrote, that would come from that… You can’t try to copy, or even write something that’s so close, that it will only make us pale in comparison. And yet we couldn’t help but find ourselves in the Mary Poppins vernacular.”

Emily Blunt is Mary Poppins, Lin-Manuel Miranda is Jack, Pixie Davies is Annabel, Nathanael Saleh is John and Joel Dawson is Georgie in Disney’s MARY POPPINS RETURNS, a sequel to the 1964 MARY POPPINS, which takes audiences on an entirely new adventure with the practically perfect nanny and the Banks family.

Marc: “We had a great four months of working with Rob and his partner John and the screenwriter, David Magee, where we really start from the beginning of the movie. They had had the idea that it would be about Michael Banks, a recent widower. And that would be the crux of what’s going on, and then we just pieced the movie scene by scene. And figuring out which songs – where to put a song. And how it would speak to what was going on, or further what was going on.”

Scott: “It was interesting, with Richard Sherman, because in the first movie, they had musicalized a sequence that got cut. And we tried to musicalize the same sequence. And it got cut.”

Writing for The Actors of Mary Poppins Returns

Can you imagine knowing that the very song you compose and write will be sung by a world known Hollywood actor? Honestly I think it’d be too much pressure for this girl. Not for Shaiman and Wittman. I really enjoyed listening to how they carefully considered each song for each of the actors that would be preforming them. What care and thought right? They both shared what their writing process was, here’s what the shared with us:

Scott: “Ben Whishaw, who’s such a lovely, lovely man. He was on Broadway, doing a play. And he was in consideration for that part. So we invited him over and said, ”Would you like to sing?” And he said, “Well, I don’t really know any….” in his shy little way.”

Marc: “Can you imagine that face singing Feed The Birds? And we’re like, the part is yours.”

Scott: “And we went and wrote that song for him.”

Marc: “And a little personal note, we have a friend who had lost his wife. He wrote about it. And he would say that, when everyone was gone, he would walk around, that he would converse with her still every night about the day. But then every now and then, he would say, “Man, where did you go?” So we asked for his blessing, because he also has three kids, and just lost his wife. So we asked for his blessing to take that part of his life that’s very special. And if we could use that in this. So that’s why the song ends that way.”

Scott: “When he says, “Lovely London sky,” it was not a day unlike today.“

Marc: “He’s thinking about a gray sky. But after that they kept saying, “Is it gonna deliver Lin-Manuel?” So we wrote a second song, with a little bit more energy. And then a third song. And by the time we were in England, rehearsing, we were still writing. And we wrote the fifth song. And it was fun, I enjoyed singing it. And then, and Emily Blunt was coming down the hallway. And she said, “What is that, what’s going on?” We said, “Come in, we’ll sing you this latest song.” And she like, “Hmmmmm.”  And she ran down the hall to Rob and said, “You put that first song back in the movie. That’s the first song I heard. It was the song that charmed me into wanting to be part of the movie. It’s about London, it’s – just put that first song in.” Sometimes you gotta do all that just to come back. But the other ones we wrote two or three songs.” 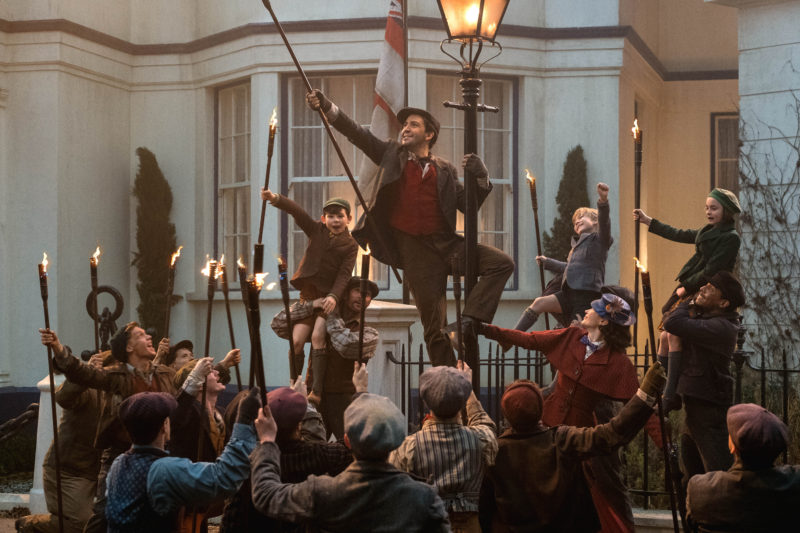 Jack (Lin-Manuel Miranda) Mary Poppins (Emily Blunt) and the Banks children with a crew of street lamplighters at 17 Cherry Tree Lane in Disney’s original musical MARY POPPINS RETURNS, a sequel to the 1964 MARY POPPINS which takes audiences on an entirely new adventure with the practically perfect nanny and the Banks family.

Living legend Richard Sherman wrote all of the music in the original Mary Poppins and it was so important for Marc and Scott to not come up with something comparable, but make it their own and also have his blessing. Here’s what they shared about working with Mr. Sherman.

Scott: “Oh, that was heaven. Last week, we got to spend a whole day with him. And it was just glorious.”

Marc: “I became four years old. I mean, there he was in front of me and I got to ask him why’d you write this song and why was it in this key? And what was that chord? And the choices of words? And what was Walt Disney like? It was so surreal that I don’t remember any of his answers. But the glorious part of it was that he loved our movie so much and that he really felt like it was in good hands. And that in some way, he said to us that the baton had been passed. It was the greatest compliment we could have ever ever gotten. The way he looked at us. And talked to us and treated us as – I wouldn’t say equals – but worthy at least to be in the room with him.”

You know me, you know I teared up something good while Marc shared this with us. I cannot say how much I enjoyed listening to Marc and Scott share with us their process and what the music meant to them.