You are here: Home / Fitness / The Reprieve Saddle: a KickStarter Campaign

Are you an avid cyclist or just enjoy riding your bike? While I’m not a road warrior, I do enjoy an awesome spin class. One of the things I can remember from the first spin class I ever took was how sore “that area” was afterwards. You know what area.. the medical term is the perineum. If you just searched the term and still aren’t familiar with the term, go to a spin class or ride a cycling bike and tell me what hurts after a couple miles. Yes, that area. I had the opportunity to ask Angie Marceleno from 3West Designs, about her innovative product with riders in mind called the Reprieve Saddle. What’s the situation with your saddle? You know the seat? Do you feel discomfort after long rides? These are all valid questions that can answer if the Reprieve saddle is for you.

First off, check out the video of the Reprieve saddle!

I was able to get some questions answered by Angela via email regarding the Reprieve saddle. Once I realized what made this saddle stand out I was very intrigued AND it’s a product developed by Texans!

Q1- What gave you the idea to come up with this product? Are you an avid cyclist?

“My husband actually came up with the idea.  He tried a number of saddles with no real luck.  He could understand pain in the ‘sit bone’ area, but could never understand why the middle and front of the saddle needed to be so hard?  He was told by a number of higher end guys that the soft tissue is supposed to hurt then it will slowly go numb.  He always thought that was idiotic, so he worked with a CAD designer to build his own.”

Q2- Who is your target market for these saddles?
“Its a great saddle for all the markets, Touring, Racing, Mountain, Track and Triathlon.  There are so many folks that hate riding saddles because of that flat hard middle to nose area.  So it really works well for folks in that range who are having a difficult time finding a good comfortable saddle.It seems everyone knows someone who fits in that category, or you hear of someone who’s seen a Urologist who tells them simply stop riding.  Once they get back on the saddle it happens again.  Its just crazy, hopefully our saddle helps the entire situation.”

Q3- Are there different sizes in saddles or just one model? Is the saddle unisex?

Just one size for now. It’s the basic men’s width. The molds are the most expensive part in building a new saddle so once we have funding to launch this one our next step is to build a women’s version. It will have a wider sit bone area roughly 145mm and a wider base at the nose to accommodate the wider bones that make up that area for a woman.

Q4- Where could someone try out the saddle?

“Unfortunately we only have two prototypes that have been pretty well worn and are spoken for a while. But if someone want’s to contact me we can see what we can do about Fedex it to them for a test ride!”

Q5- What are the benefits of the air in the saddle?

“That’s one of the best parts! We’ve focused on the biggest problem area with bicycle saddles the Perineum and Genital area. So we dropped the middle of the saddle so your Perineum doesn’t touch anything until your sit bones are set. Those sensitive areas ride on a cushion of air, instead of a hard flat surface. We call it the “Active Surface”, because when you pedal the air in the bladder moves creating an unstable surface. It’s important because it limits the “Hot Spots” in that area. Hot spots are caused by having a surface pressed against the body for too long. Also the air bladder is completely adjustable, so you can add or remove air at any point. Again it makes a huge difference.” 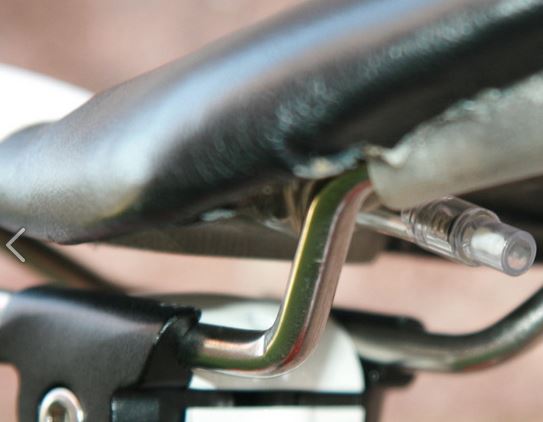 How about that?! There’s a bladder you can inflate that you can adjust to your own comfort level.

Help launch this product by donating to the KickStarter page below!