You are here: Home / Mommyhood / Just Me / Thursday Thoughts

First off I’m just hoping you can read this post.. My site has been up and down lately and I’m just sick over it. So here’s this week’s Thursday Thoughts! 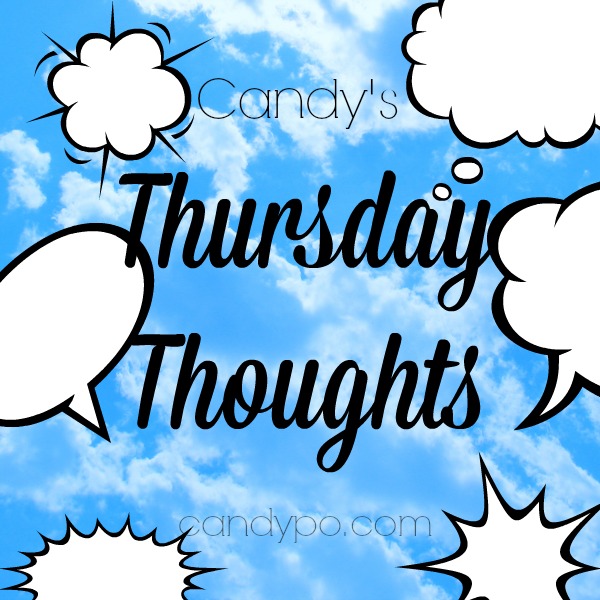 -Let’s talk music.. I love listening to music and exposing the kids to different genre’s of music. Are other parents doing the same thing? This week we’ve been listening to Oldies. You know 50’s, 60’s and 70’s.. Did you know the song Wipe Out was a one hit wonder for The Surfaris?! Yes! I had no idea.. but I wasn’t alive then to follow the band.. But I def remember playing Wipe Out in the band!! Holla fellow band geeks! I played the flute.. What instrument did you play?? I would have played until Senior year, but my marching skills were not good at all.. (think going the wrong way in formation.. yeah that was me! and the band director was not nice at all) So I quit after my freshman year.. If I’d had the option for Orchestra all year. I would have stayed in..I was third chair.. so I like to think I was kinda good. LOL Anyways.. got off subject..

Back to the Oldies.. You’d be surprised how many recent artists have ripped from music from the past. I felt so terrible when I was listening to one song this morning and I kept waiting to hear the Black Eyed Peas come on.. yeah that’s sad right? They bring back the Oldies for a reason ya’ll.. just saying! Shit how bad does that statement date me? I’m only 34 ya’ll.. seriously! But I’ve got an old soul I guess! LOL

-Halloween costumes.. Are you dressing up? I’m wearing a pink Power Ranger shirt for my boys.. They will be red rangers.. But seriously the same debate about the sexy costumes comes up every year. Why hasn’t anyone done anything about it? For this I’m thankful to have boys. I’d be dressing up the girl as a gypsy each year just to make sure she’s wearing a long skirt to keep it civilized.. Parents of young girls.. I don’t envy you at all! Keep them girls classy ya’ll!

-So as I mentioned above my site has been going up and down lately. I just want to throw up when I come to log in.. I mean seriously this should not be happening.. I’m not some huge blog that gets thousands upon thousands of hits. Are you a blogger? What hosting do you use?

-Sounds that go bump in the night.. I am a scardy cat. I like to think I’m a bad ass that can shoot a gun and rifle but I think deep down I’m just a scaredy cat. Sometimes when I hear things at night I wake up and go check everything. Every door all the windows and every time I damn myself for putting up the Halloween window coverings that I did so I can’t look out of it. Seriously a dumb move on my paranoid self. The hubs rolls over and says “huh?” So I’m like.. “shit I’ll go check. Come look for me if I’m not back in 5″.. Who gets up to check in your house?

-What is it with having a clean house one day and it’s thrashed the next? I can’t keep it together ya’ll.. Theses boys make me feel like I’m drowning in a filthy house sometimes.. I swear it was clean yesterday! My room.. it was clean all the clothes was picked up and put away.. I made the mistake of leaving some socks and a couple shirts on my Ikea foot rest that goes to a chair and Ezra spread it all around the room.. Really child? Why? have I had a chance to pick it up? Well heck no.. sorry not sorry ya’ll.. I’ve got bigger fish to fry.. But it’s exhausting non the less..

-I’ve been telling myself for two weeks now that I’m going to wash my car.. It has yet to happen.. I’m not sure what’s going on..

And my site just went down a flipping gin.. to not loose my shit again.. I’m FML.. it happened again.. as I was typing.. before it goes again I’m hitting publish!!

Please excuse my language..  I hope you are having an amazing day!!