You are here: Home / Entertainment / Interviewing Storm Reid and T.R. Knight of The Bravest Knight Now on HULU #TheBravestKnight

It’s not every day you get to interview an “almost knight“. An “almost knight” is a person that is preparing to become a knight one day. HULU’s newest animated series The Bravest Knight is now available on all of your favorite streaming devices and you are not going to want to miss it! I had the opportunity to join in on a teleconference interview with two stars from the series. Thanks to HULU for the opportunity, all opinions expressed are my own. Interviewing Storm Reid and T.R. Knight of The Bravest Knight Now on HULU. 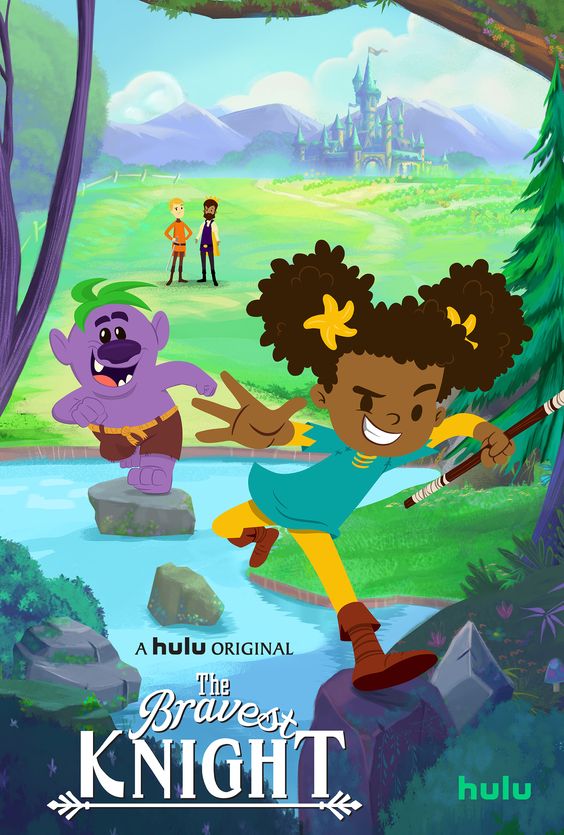 Storm Reid and T.R. Knight joined in for a great phone interview and I’m so happy to share how this exclusive interview with you. If you are looking for a show to share with your children that has positive messaging and beautiful inclusive lessons within each episode, you’ve got to check out The Bravest Knight. Storm and T.R. had some great insight to share on what the show means to both of them.

T.R. Knight plays one of the two fathers Sir Cedric in the show and Storm Reid plays Nia. Reid shared some insight on her character. “She [Nia] is very energetic and headstrong, and she really exudes girl power, which I think is very inspiring for other little girls that are watching and just young people in general to just not have any fears, and try to do what you want to do,” Storm Reid says. “And you may make mistakes, but you have to just get back up and try again.”

The Bravest Knight — “Cedric & the Cave” — Nia is taught how to track in the woods as she hears the tale of Cedric and Grunt hiding from a Yeti in a mountainside cave. By being resourceful, they are able to escape the beast and find the secret to its anger. (Photo courtesy of Hulu)

I could hear the pride Reid felt when talking about her character and what she hopes kids will take away from the series, here’s what she “Be themselves,” Reid says. “And even though, Nia is training to be the bravest night, not at all times are you going to be brave. Sometimes you’re going to be scared, or sometimes you’re going to be scared of taking risks, but that shouldn’t stop you. Just know that they are perfectly imperfect and they don’t have to conform to what society wants them to be or what society wants them to look like. If they want to get rough and dirty, they can, and they shouldn’t feel any type of way about it. So I just hope they really find themselves within the show and really kind of connect with Nia and to themselves and just really know that they are worthy enough of being seen and being heard. And they could also be themselves while doing that.”

T.R. Knight shared how he felt represented in the series being a gay man, “When I grew up and since I’m older now, I never saw myself represented, even though a teenager even in my early twenties, I rarely saw anything that, even if there were gay people represented, it wasn’t, I didn’t feel it was a representative of my life or really what I was going through.”

Based on a Book

As mentioned above, this cute series is based on a book! Wondering if the series sticks to the book? Yes! It is very close to the book it is based on by Daniel Errico “The Bravest Knight Who Ever Lived,”, but it is also the first time ever that animation features a story that has a family with two dads and an adopted daughter, as T.R. Knight. He goes on to share that he is in awe of the opportunity to work on this project.  As a matter of fact, he has been wanting to work in animation for quite some time.

Knight shared that while the episodes stay as close to the book, the imagination of it truly comes to life on screen.  All the big topics from the book are covered. T.R. also shared that he would love to further dive into more social issue with it in the near future but that for now they were very pleased with the tone of the series.

Both T.R. and Storm agreed that it is difficult for people to relate when they are not represented.  Growing up, it is the feeling they both had when watching TV and movies. And so, it is their hope that this series helps open hearts and minds as well as show that inclusion is the way of today. You will find lessons on love, friendship, bravery, and tolerance.

ABOUT THE BRAVEST KNIGHT

The new series is breaking boundaries, featuring a household with two dads (Sir Cedric and Prince Andrew), making it one of the first children’s television series with an openly gay main character. Following the inspiring and perseverant former pumpkin farmer, Sir Cedric, now grown and married to the prince of his dreams, The Bravest Knight recounts personal tales of his journey. Sir Cedric shares his story with his adopted 10-year-old daughter Nia, on how he transformed from day-time farmer to full-fledged knight. Nia, who is training to become a brave knight herself, learns important values such as honor, justice and compassion; proving that knighthood is much more than slaying dragons.

The new series is breaking boundaries, featuring a household with two dads (Sir Cedric and Prince Andrew), making it one of the first children’s television series with an openly gay main character. Following the inspiring and perseverant former pumpkin farmer, Sir Cedric, now grown and married to the prince of his dreams, The Bravest Knightrecounts personal tales of his journey. Sir Cedric shares his story with his adopted 10-year-old daughter Nia, on how he transformed from day-time farmer to full-fledged knight. Nia, who is training to become a brave knight herself, learns important values such as honor, justice and compassion; proving that knighthood is much more than slaying dragons.

The Bravest Knight continues Hulu’s commitment to connecting with kids and families through bold approaches in storytelling, and continues to be a supporter of LGBTQ content and creators. The Bravest Knight joins Hulu’s impressive kids original content offering, including Holly Hobbie, Find Me In Paris and Doozers along-side its acquired library of premium kids and family content.

Hulu is the leading premium streaming service offering live and on-demand TV and movies, with and without commercials, both in and outside the home. Launched in 2008, Hulu has grown to more than 28 million customers in the U.S. and is the only service that gives viewers instant access to current shows from every major U.S. broadcast network; libraries of hit TV series and films; and acclaimed Hulu Originals like Emmy® and Golden Globe Award-winning series The Handmaid’s Tale, Emmy® Award-nominated The Looming Tower, Catch – 22, Shrill, The Act, Marvel’s Runaways and Castle Rock,and Oscar®-nominated documentary film Minding the Gap, as well as live news, entertainment and sports from 21st Century Fox, The Walt Disney Company, NBCUniversal, CBS Corporation, The CW, Turner Networks, A+E Networks and Discovery Networks – all in one place.

Upcoming Hulu Originals include Four Weddings and a Funeral from Mindy Kaling; Wu-Tang: An American Saga from Brian Grazer and The RZA; and Little Fires Everywhere from Reese Witherspoon and Kerry Washington.